Pittsburgh Seminary is sad to announce the death of Board Member Emeritus Henry C. Herchenroether Jr., who died peacefully Dec. 17, 2019, at the age of 99 in his residence at Sherwood Oaks Retirement Community (Cranberry Township, Pa.).

“As we say goodbye to this faithful servant of God, who for decades filled such key roles in the ministry of PTS, we also celebrate his life and the work for the gospel God accomplished through him. We are immensely thankful that Henry’s legacy continues at the Seminary,” said the Rev. Dr. David Esterline, president and professor of cross-cultural theological education.

A former attorney with Alter, Wright & Barron and its successor firm, Sherrard, German & Kelly, P.C., Henry began serving on the Seminary’s Board in 1960 and received emeritus status in 1997. He served PTS in roles that included Board chair, legal counsel (now filled by his son Peter Herchenroether), and interim president. In 1991 he received the Anderson Award of Merit—the highest honor bestowed by the Seminary—in recognition of his exemplary service and contributions to PTS. He was granted additional honors from Allegheny County, the Pennsylvania and American Bar Associations, and the National Association of College and University Attorneys.

After graduating from Pittsburgh’s Oliver High School, Henry received his bachelor’s degree cum laude from Westminster College (New Wilmington, Pa.), served as a Lieutenant in the US Navy during World War II, and earned his JD at the University of Pittsburgh School of Law. He served his college alma mater as a member and chair of Westminster’s Alumni Council; his church—Community PC of Ben Avon—as Clerk of Session and co-chair of its building committee; and his community as Mayor of Ben Avon Borough, Trustee of Union Dale Cemetery, and a life member of the advisory board of the Greater Pittsburgh Salvation Army.

In 2019, Henry—whose long and intimate association with PTS afforded him a veritable treasure trove of information and memories about the Seminary—was interviewed by historian John Horan as part of the Seminary’s Oral History Project, titled “Early Years, Consolidating Memories.”

Henry was predeceased by his wife of 60 years—Nell, who died in 2009—and his son Daniel, who died in 2018. In addition to Peter, Henry is survived by his son Richard and his daughters-in-law Susan, Sue, and Wendy. 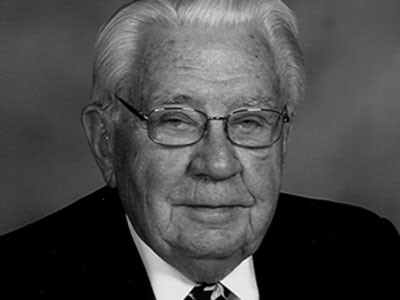