An American Baptist in his mid-30s, PTS Presidential Scholar the Rev. James Riggins ’08 was at a point in his life when the way ahead was not clear to him. So he consulted with then-World Mission Initiative director Don Dawson, who connected James to PCUSA mission co-worker Sharon Bryant, coordinator of Christian Volunteers for the Church of Christ in Thailand. She invited James to come there as an English teacher. In fact, James was the first volunteer Sharon recruited in her work with CVT! And while James wasn’t sure he wanted to teach English, he believed God was calling him to Thailand through the CVT program. He arrived in the fall of 2012.

After three years of service in Padoongrasdra School, while also ministering to a small group of English-speaking ex-pat worshipers every Sunday afternoon, the Thai church chartered a new international church in Phitsanulok and called James as its first pastor. James learned the charter was part of a bigger plan of God in the long history of missionary work in Thailand—it completed a cycle as the first church planted by a Thai pastor with the aim of reaching out to non-Thai. Further, while James was serving as the church’s pastor, he met a vibrant young Filipina Christian who was teaching at a government school in that town. They fell in love, and James and Goodwill were married in October of 2016.

But the story didn’t end there. James continued to serve as pastor of Great Commission International Church for another four years.

While building up the congregation, he also started a doctoral program in intercultural studies. As his coursework in that program continued, God again reached out to James and called him to teach, this time at an international university, also in Asia.

He and Goodwill left Thailand in August 2019 to head to his new assignment. But they didn’t leave alone, as earlier this year they welcomed their firstborn baby—James Alex!

God tells us to recognize the new things God is doing right in front of us. Back in 2012, James trusted that God was calling him to ministry in Thailand and went there not knowing what to expect. But he was willing to take that first step into the unknown. And God more than answered his prayers—his prayers for guidance in life, for a partner in Christian service, and for a fruitful ministry. Not only has James’s ministry enriched the lives of the students he’s taught—it has also enriched his own life. 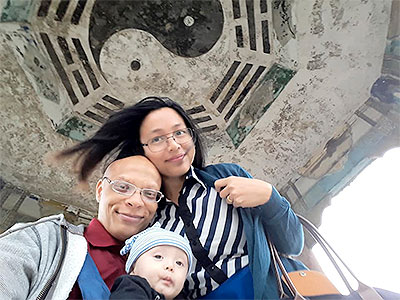