Jay Oriola ’18 Works Tirelessly to Transform Lives in the City

“God has given me a desire to preach the gospel, transform lives, and help those in need. So I am thankful that he directed me to PTS, where by his grace I am graduating with my master’s in theology and ministry.” So reads a letter of thanks to scholarship donors written by Emiola (Jay) Oriola ’18, Dorothy Hardy / Titus Basfield Recognition scholar originally from Nigeria. Now with a bachelor of science in psychology from the University of Pittsburgh, an MATM from Pittsburgh Seminary, and a recently earned graduate certificate in Christian apologetics from Biola University, he’s pursuing his passion for ensuring the development of youth and their overall success in and out of the classroom—and his doctorate in education—at the University of Pittsburgh.

I believe that service is the rent we pay for the privilege of living on earth; so I am making sure I pay and give what needs to be given.

Educationally, Jay had significant obstacles to overcome in his teenage years, however. Living with his mother in Washington, D.C., but without a permanent address, he was not allowed to enroll in school and so had to drop out of eighth grade. He spent the next two and a half years exercising, reading, “and mainly doing a lot of thinking,” he reflects. “The roots of my faith came from my mother,” says Jay. “In my dark times, she was like the sun in human form.” When, quite gratefully, he resumed school in ninth grade, Jay quickly caught up from where he’d left off, thanks to his newly self-disciplined study habits and his eagerness to learn—in school as well as on his own. After attending three high schools, Jay graduated in 2008 at the top of his class.

Jay’s own educational experience has influenced his current work to inspire young people to “own their education, to be proactive learners.” As associate director for Pitt’s INVESTING NOW program, Jay advises students, tracks their academic progress, and prepares them for the transition from high school to college. He’s created life-skills workshops, a student advisory committee, community volunteer opportunities, and career awareness to strengthen the minds and hearts of high-achieving but traditionally underrepresented students preparing for college and careers in science, technology, engineering, and math (STEM). And his leadership of the Urban League of Pittsburgh’s Black Male Leadership Program Institute is well recognized. “I believe that service is the rent we pay for the privilege of living on earth; so I am making sure I pay and give what needs to be given,” he says.

Also a self-described “traveling poet and spoken word artist,” Jay is seven-time Spoken Word Champion for the City of Pittsburgh and a featured speaker at many of the region’s slam-poetry events. He employs this gift in encouraging students to share their voices, too. “There’s no magic to expressing yourself—you just do it,” he tells them. For INVESTING NOW, Jay created the Speak Up event to help students build their public speaking skills and confidence and to share their passions with other people. Thus participation has both educational and interpersonal value for the students. “I want these gifted young people to learn that engineering, for example, is not something they perform or do but is who they are—problem-solvers and critical thinkers.”

Jay is also a published author! His book, Thorns & Thistles: A Message From Dust to Dust (2017)—which he’s turning into a film—contains poems that confront pain in our lives to “help inform, persuade, and compel you to . . . meet truth in the flesh, and discover the word in you.” He notes, “If you refuse to open your present simply because pain is the wrapping paper, your future will not forget.” Stay tuned for Jay’s second book, which he’s already begun writing, and keep on the lookout for the non-profit he’s creating that fuses ministry/evangelism, education, community engagement, and the arts—“kind of like 21st-century evangelism,” he says.

Not surprisingly, in 2016 Pittsburgh Magazine featured Jay in its 40-under-40 list of people making a difference through community service and professional achievement. The New Pittsburgh Courier recently recognized him with its 2017 Men of Excellence Award. “This city has blessed me indeed,” Jay says—as he has blessed others and as God has blessed him. 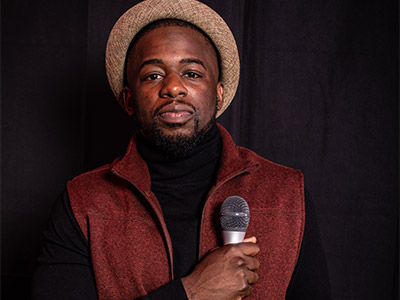