There are many different roads to seminary. Some people discern callings through prayer, some through advice from mentors. For MDiv student Luke Hillier, the pull to Pittsburgh Theological Seminary occurred through his hands-on experience of urban ministry.

While in college, Luke began to feel a tension between the theologies of two parts of his life: the campus ministry he was involved in and the authors he was reading who spoke a language of liberation and justice. Seeking to bring together these two worlds, he discovered a program in Philadelphia that combined intentional community, neighborhood service, and urban ministry. He fell in love with his neighborhood and the ministry—so much that after a year as a participant, he spent another as a leader and three more as the city director.

Luke did not know what would come next after his stint with this program, but he knew that his most passionate sense of purpose and gifting occurred when he was engaging in one-to-one mentorship, counseling and caring for people in crisis, and helping them to experience God’s presence. As he began to discern what context would be the best fit for this calling, he realized it would be hospital chaplaincy—and it may have helped that his mother is a longtime nurse!

A career in chaplaincy would likely require a master of divinity degree, so Luke began to explore seminary options. He visited the PTS campus and was blown away by both a generous financial aid package and the admission team’s hospitality. It was an easy decision.

So far at Pittsburgh Seminary, Luke is most grateful for two gifts. First was the class Exploring Christian Worship, taught by Dr. Angela Hancock.

“Based on the title alone,” Luke recalls, “I thought this class would be about leading a choir. But on our first day together, I realized the course would focus on theodicy—the questions of God and suffering. The semester was so rich, and it was very relevant to my past and future ministry.”

The other gift has been his Field Education experience. Luke is serving as a chaplain at a local hospital. He has been able to learn from a supervisor there with decades of experience in chaplaincy ministry, and he loves the chance to do the very type of ministry for which his education is preparing him.

Luke completed a chaplaincy internship this summer in Columbus, Ohio, and hopes to pursue a year-long residency there after graduation. He would like to continue exploring different types of care contexts, such as trauma, palliative, and mental health.

Wherever his calling takes him next, we are grateful to be part of Luke’s journey! 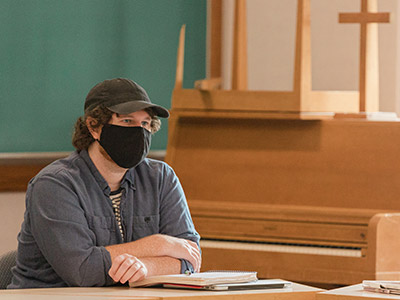