Pittsburgh Theological Seminary is mourning the loss of the Rev. Dr. Johannes G. J. Swart, associate professor of world mission and evangelism. Swart died Sept. 8 from an apparent heart attack while playing Frisbee with students. Memorial services were held at Second Presbyterian Church in Oil City, Pa., and at the Seminary (watch below).

“It’s hard to believe that this bright light has gone out,” said the Rev. Dr. William J. Carl III, president and professor of homiletics at Pittsburgh Theological Seminary.  “In a very short time, Jannie Swart made an enormous impact in this community. His passing is truly a loss to the Seminary, the Church at large, and the world. We will not see one like him again anytime soon.” 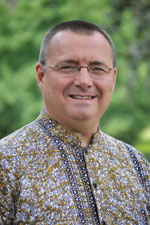 Before coming to the Seminary, Swart served as pastor of Second Presbyterian Church in Oil City, Pa. He was a graduate of Luther Seminary (Ph.D. in Congregational Mission and Leadership) and University of Stellenbosch (B.Th., B.A. Philosophy, B.A.).

Swart previously served as senior pastor of Fontainebleau Community Church in Johannesburg, South Africa. There he led a Dutch Reformed mega-church during their post-apartheid attempt to become more multi-cultural, multi-racial, and multi-lingual. Before that, Swart led a new church development among college students at an emerging technicon campus in Cape Town while serving at Tafelberg Dutch Reformed Church in Cape Town, South Africa. Additionally, Swart worked as the national director of training and development for the Democratic Party in South Africa, a new, emerging political party (merger of three different political parties) in opposition of the apartheid policies of the National Party (prior to the release of Nelson Mandela, the unbanning of the African National Congress, and democracy).

Swart worked with St. Matthew’s Episcopal Church in St. Paul, Minn., as director of intergenerational faith formation; the Church Innovations Institute in St. Paul, as the director of partnership for missional church; and the Allelon Foundation in Boise, Idaho, as the research assistant for Allelon’s Mission in Western Culture Project.

He was involved in several research projects. His publications include articles, book chapters, and book reviews. Most recently his article “Via the Broken Ones: Toward a Phenomenological Theology of Ecclesial Leadership in Post-Apartheid South Africa” appeared in the Journal of Religious Leadership. Swart previously taught at Luther Seminary, Agora College, and Rochester College.

He is survived by his wife Mari and their two children, Suné and Janco.