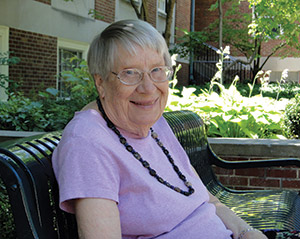 Nancy Lapp “retired” in 2000. But one look at a list of her accomplishments since then tells a far different story! After 30 years as curator of Pittsburgh Seminary’s Bible Lands Museum—now the Kelso Museum of Near Eastern Archaeology—Nancy has devoted even more time than she had before to publishing in the field of Near Eastern archaeology.

Curator emerita of the Museum for the last 15 years, Nancy most recently saw the publication of two volumes she edited. Tell er-Rumeith (ASOR, 2015) describes the excavation from a Jordanian site near the Syrian border and is important for its remains from the time of the Israelite kings’ encounters with the Arameans. Figurines to Bones: Studies of Some Finds from the 1963-1968 Excavations at Tell Ta’annek, Nancy co-edited with Hamed Salem (Birzeit University, 2015). Both excavations were directed by Nancy’s husband, Paul W. Lapp, professor of archaeology at Pittsburgh Seminary from 1968 until his death in 1970.

With a slew of technical excavation reports to her credit as editor and author, Nancy was both surprised and delighted to learn that the American Schools of Oriental Research named its latest book award after her—The Nancy Lapp Popular Book Award, first presented in November 2015. “The only popular article I’ve written would be ‘A Jug Fell into a Cistern,’ for a Lutheran Church School publication,” says Nancy. “But they said they named the award after me because to write a good popular book about archaeology, you have to have done the technical research that lies behind it.” And Nancy has certainly provided writers with lots of material for research.

After her husband’s untimely death, Nancy, with extensive graduate education and field experience in Near Eastern studies and archaeology herself, began work toward publishing Paul’s numerous excavations. Many of them were conducted when the Lapps were living in Jerusalem and while Paul was director and professor of archaeology at the American School of Oriental Research in Jerusalem (1960-1968). Since 1970, Nancy has been researching and editing reports on his and others’ excavations in Israel, the West Bank, and Jordan at sites such as Shechem, Tell el-Ful (possibly Gibeah of Saul), and the Dead Sea Plain (perhaps the location of Sodom and Gomorrah).

Nancy’s next project is completing a second volume from the first excavation Paul directed—that at Araq el-Emir, the  location of a Hellenistic fortress between Amman and Jerusalem in Transjordan. “After that, from Paul’s excavations there’s only more material from Ta’annek to finish,” says Nancy. A big part of her job is always to get competent scholars to contribute to the publications.

As committed to her work as ever, this capable scholar emerita continues in “retirement” to make significant and relevant contributions to our understanding of the Bible and its world through her careful examination, interpretation, and publication of ancient Near Eastern remains—understanding gained not just by archaeologists, but also by biblical scholars, pastors, and people in the pews. Just ask ASOR.

The Nancy Lapp Popular Book Award is presented to the author/editor of a book published in the last two years that offers a new synthesis of archaeological or textual evidence intended to reach an audience of scholars as well as students and the broader public.