“I feel extremely blessed to be the first Caribbean international student at Pittsburgh Theological Seminary, thanks to a generous academic scholarship,” says Rafael Salinas Urrego. Born and educated in Barranquilla, Colombia, Rafael made the sacrifice of leaving behind his wife, children, grandchildren, and congregation to further his theological education at PTS.

“I became a Christian 30 years ago,” he says, “and after completing three years of biblical studies in a church-related institute, I received a call to serve Jesus as part-time pastor of a church my wife, Deisy, and I had started in Soledad. I also worked as an English as a foreign language teacher for the Centro Cultural Colombo Americano.” In addition, Rafael and Deisy founded an association of pastors in the area in which they lived. Unidad de Ministros de Soledad began with pastors from five churches; today, 40-60 UNIMISOL members gather together every 15 days for mutual support and fellowship.

Initially continuing to pastor and teach, Rafael also began an undergraduate program in theological studies—a five-year commitment—at the Universidad Reformada, in Barranquilla. “The workload was overwhelming, and in the sixth semester of my program, I found it necessary to discontinue my job as an ESL teacher,” he recalls. After graduating in 2008, he continued his studies at UR by earning a master’s in human and organizational development.

But Rafael’s desire to learn more didn’t stop there. “While teaching in the University’s bilingual (English-Spanish) undergraduate program, I enrolled in a master’s program in philosophy—at the encouragement of my wife, who herself is now pursuing that degree. The University’s vice principal, however, knew I was interested in graduate studies in theology, and he made me aware of the opportunity to study at Pittsburgh Theological Seminary. He proposed that I apply for a scholarship available through an academic interchange agreement between UR and PTS,” notes Rafael.

“I applied and received the offer of the scholarship, and my wife, family, and I agreed that it presented a unique opportunity for me to acquire new knowledge and experience—and to become a better minister of the gospel, both socially and academically.”

So Rafael put his philosophy program on hold to begin a master’s in theological studies at PTS.

In addition to his course work here, Rafael will write a thesis focusing on the topic of transhumanism. “I became interested in that topic while studying philosophy,” he notes. “Our exploration addressed transhumanism from a philosophical perspective, but I didn’t come across much material from a theological perspective—until I came to PTS and met Dr. Ron Cole-Turner!” In his thesis Rafael plans to carry on a dialogue between science and the Bible about aging and death. Is aging part of God’s original plan? How does the aim of transhumanists to achieve human immortality relate to 1 Corinthians 15, where Paul talks about the resurrection and Christ’s having conquered death through his work on the cross?

While advancing his theological preparation, Rafael is also furthering his proficiency in English language by studying in the U.S. After completing his master of theological studies in December, he looks forward to reuniting with his family and his congregation even better equipped to serve Jesus in Colombia. 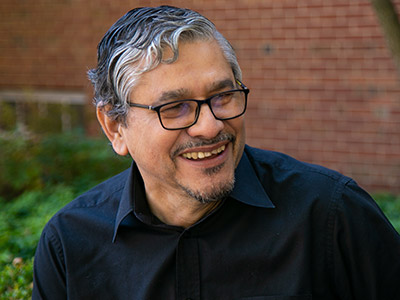