For master of theological studies grad Thawng Hei ’19, peace-building and inter-religious dialogue are integral parts of God’s calling on his life. Thawng is originally from Myanmar, where most of his family still lives, and came to PTS this year to earn a master’s degree with the hope of one day achieving his childhood dream of earning a Ph.D. in the United States. He hopes his research, which explores the role of Christianity in peace-building and inter-religious dialogue in the Myanmar context, will help him lead his community there toward a more harmonious future.

Thawng explains that Myanmar has been plagued by ethnic civil war for the last several decades, since gaining independence from the United Kingdom in 1948. The largest, Buddhist ethnic group, the Bamar, still hold most of the leadership positions in the country. Minority ethnic groups such as the Chin, the group to which Thawng belongs, often struggle to have their voices heard—a situation that leads to ongoing conflict. While peace talks remain a priority for the government in Myanmar, Thawng believes that Christianity is integral to bringing about lasting peace in his country.

“Christianity has a very distinctive role to play in the peace-building process in a country with this kind of long, historic conflict,” he says.

Under the new, democratic government in Myanmar, ethnic minorities have gained more representation in positions of power, and Christians in Myanmar have been given more opportunities to participate in the political process. Thawng and others feel that this recent development represents a hopeful trend for Christians to help build a more peaceful society going forward. “The Myanmar church needs to initiate peace-building,” Thawng says, while he also notes that the process is ongoing and can take many years before becoming effective.

It is with all these observations in mind that Thawng seeks to learn more about how his faith can be an agent for change and peace in Myanmar. He hopes to earn his Ph.D. in the next few years and then return to Myanmar as a community leader. “I feel God’s call on my life for this important work—and also God’s call to continue serving as a teacher and pastor to people in my community,” he notes.  Before beginning his graduate work at PTS, Thawng served for several years as a pastor and teacher in the city of Yangon, and he earned his master of theology degree from Asia Graduate School of Theology in Quezon City (Metro Manila), Philippines.

All the way from Pittsburgh, Thawng still plays an active role in his family and home community. Thanks to modern technology, he is in regular communication with his wife and two children, who remain in Myanmar’s capital, Yangon, and he stays in touch with his friends and fellow Chin people. “I offer my advice on political questions, and I look forward to being involved in my country’s elections in 2020,” he says. Thawng expects that his work at PTS will prepare him for faithful leadership in the church and effective advocacy for peace in his beloved home country. 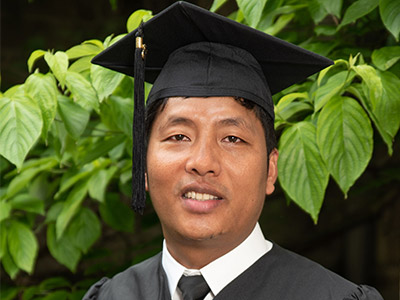