That’s just what Dr. van Driel has done over the last decade as New Testament scholars, gaining deeper understanding of Paul’s Second Temple Judaism, began offering fresh interpretations of the apostle’s letters that broadened, challenged, and corrected traditional Protestant readings of the texts. What Dr. van Driel noticed was that the scholarly work on these new perspectives on Paul seemed to occur in silos—the exegetes (those seeking to determine Paul’s original meanings) were doing the work in isolation from theologians, who just kept on defending traditional Protestant beliefs.

“Where are the theologians?” he wondered. “Someone needs to take the baton from the exegetes and run the theological leg of the race.”

Conveniently, Dr. van Driel is himself an accomplished theologian, with multiple degrees from both Yale University and Utrecht University (Netherlands). And so he decided to pick up the exegetical baton from scholars like N.T. Wright and Richard Hays. He set aside his other research to discover what happens, theologically, when we read the Scriptures afresh—helped along by new insights from these scholars, and with no concern for simply repeating what the Reformers have already said.

The result is Dr. van Driel’s Rethinking Paul: Protestant Theology and Pauline Exegesis (Cambridge 2021). This academic and interdisciplinary book brings contemporary exegetical readings of Paul into conversation with traditional Protestant theology. It explores how a theological understanding of Pauline exegesis might play a role in the most pressing theological questions of our day—questions about human nature, race, and the church’s mission.

For students who are interested in these questions and Dr. van Driel’s interdisciplinary approach, good news! He will be teaching a course on this material at PTS in the spring of 2022. 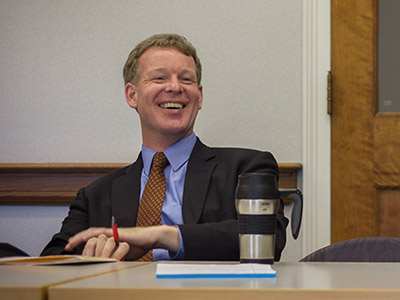