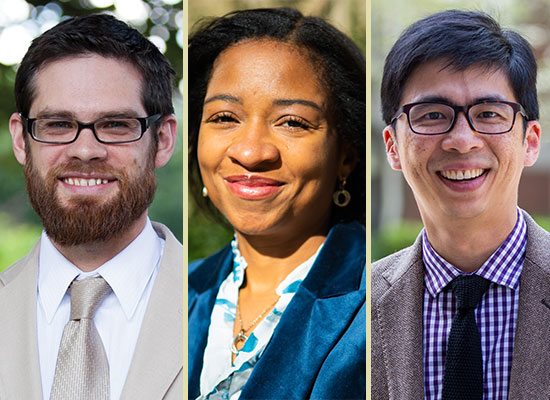 “Pittsburgh Seminary is blessed by the significant and distinctive scholarship these three faculty members contribute to our mission and community. Granting them tenure acknowledges their dedication to academic excellence,” said the Rev. Dr. Asa Lee, president and professor of theological formation for ministry at Pittsburgh Theological Seminary. “Dr. Kaalund is the first African American woman to receive tenure, and Dr. Woo is the first Chinese American to receive tenure at PTS. These promotions represent the Seminary’s future of stellar scholarship and furthers the commitment to amplifying diverse voices of Christian witness as we prepare students for ministry today.”

Dr. Ferda has taught at PTS since 2013, and currently serves as an associate professor of New Testament. He earned his Ph.D. from the University of Pittsburgh, where he also served as teaching fellow. In 2015, he was named a Regional Scholar of the Society of Biblical Literature, an award which “recognizes and promotes outstanding entry-level scholars.” He has expertise in a wide range of areas in biblical studies, including the Gospels, the life of Jesus, the Old Testament in the New, the history of biblical interpretation, Hellenistic Jewish literature, the Dead Sea Scrolls, and the theological interpretation of Scripture. Many of these interests intersect in his first book, Jesus, the Gospels, and the Galilean Crisis (Bloomsbury T&T Clark, 2019), published in the Library of New Testament Studies series. Ferda â€‹is a frequent presenter at regional and national SBL meetings, and he has published more than a dozen articles in top-tier biblical studies journals, including Journal of Biblical Literature, Journal of Theological Studies, New Testament Studies, and Journal for the Study of Judaism. He is currently working on a monograph on the second advent hope in the New Testament and its reception history. He is a member and deacon at East Liberty Presbyterian Church in Pittsburgh, and he frequently leads studies and provides pulpit supply in area churches.

Dr. Kaalund, who serves as an associate professor of New Testament, joined the PTS faculty in 2021 after serving as assistant professor of religious studies at Iona College. At Iona in 2020, she received the Junior Faculty Award. Kaalund received her Ph.D. in New Testament and early Christianity from The Theological School at Drew University. Her current research interests include contextual biblical hermeneutics, contemporary uses of the New Testament, and material culture. She is a member of the Society of Biblical Literature, where she serves as an editorial board member for the Bible Odyssey and co-chair of the steering committee for “Space, Place, and Lived Experience in Antiquity.” She presented twice at the 2021 meeting of the Society of Biblical Literature, on “I Thirst: Spirit, Truth, and Living Water” in the Asian and Asian American Hermeneutics with Latino/a and Latin American Biblical Interpretation Sections, and “So Great a Cloud of Witnesses” in the Womanist Interpretation Section. She is also a member of the American Academy of Religion, the North American Patristic Society, and the Catholic Biblical Association, and she is an editorial board member for the Journal of Feminist Studies in Religion. Her numerous publications and lectures include the monograph Reading Hebrews and 1 Peter with the Great Migration: Diaspora, Identity, and Place (Bloomsbury/T&T Clark, 2018), part of the Library of New Testament Studies series; and “‘You Can’t See What I Can See’: Reading Black Bodies in Galatians”, an essay published in Stony the Road We Trod: African American Biblical Interpretation Thirtieth Anniversary Expanded Edition (Fortress, 2021).

Dr. Woo, associate professor of church history, began teaching at PTS in 2016. He previously taught at Duke Divinity School, Redeemer Seminary, and the College of New Jersey, and has served as a faculty member in the United Methodist Church Course of Study program for ordained ministry. Woo received his Th.D. in the history of Christianity (Reformation Studies) from Duke University in 2015. Before that he completed his M.Div. at Westminster Theological Seminary and B.A. at the College of William and Mary. Woo’s doctoral dissertation examined the complex ways in which John Calvin and his followers employed theological polemics against religious dissimulation to establish and enforce social and ecclesial boundaries in a variety of 16th-century contexts. His latest publication is Nicodemism and the English Calvin, 1544–1584 (Brill, 2019). His next book, an introduction to the writings of John Calvin through the lens of the reformer’s experience as a religious refugee, will be published by Baker Academic. Beyond the European reformations, Woo’s research interests span the development of the Reformed tradition, the intersection of biblical interpretation and church history, historical religious responses to persecution and mass migration, and Asian-American history and theology. His work has appeared in Church History and Religious Culture, Concordia Theological Quarterly, Reformation and Renaissance Review, and Sixteenth Century Journal, as well as in volumes published by Oxford University Press and Cambridge University Press. In October 2021, Woo was elected to the board of trustees of the Foundation for Theological Education in South East Asia. A Reformed Church in America minister, Woo has served churches in New Jersey, Virginia, and North Carolina, as well as several years in campus ministry. He served for six years as pastor of a multicultural congregation near Washington, D.C.