Assistant Professor of New Testament
Year Started in this Position at PTS: 2020

Dr. Tucker Ferda is assistant professor of New Testament. Since 2017 he served at PTS as visiting assistant professor and from 2013-2016 as instructor. He earned his Ph.D. from the University of Pittsburgh, where he also served as teaching fellow. In 2015, he was named a Regional Scholar of the Society of Biblical Literature, an award which “recognizes and promotes outstanding entry-level scholars.” Dr. Ferda has expertise in a wide range of areas in biblical studies, including the Gospels, the life of Jesus, the Old Testament in the New, the history of biblical interpretation, Hellenistic Jewish literature, the Dead Sea Scrolls, and the theological interpretation of Scripture. Many of these interests intersect in his first book, Jesus, the Gospels, and the Galilean Crisis (Bloomsbury T&T Clark, 2019), published in the Library of New Testament Studies series. Dr. Ferda ​is a frequent presenter at regional and national SBL meetings, and he has published more than a dozen articles in top-tier biblical studies journals, including Journal of Biblical Literature, Journal of Theological Studies, New Testament Studies, and Journal for the Study of Judaism, among others. He is currently working on a monograph on the second advent hope in the New Testament and its reception history. Dr. Ferda is a member and deacon at East Liberty Presbyterian Church in Pittsburgh, and he frequently leads studies and provides pulpit supply in area churches.

When the time came for Tucker Ferda to leave his western-Montana home for college, he set his face eastward. “I enrolled at Bethel University in St. Paul, Minnesota, with a plan to major in history and become a high-school history teacher,” Tucker says, “but thanks to the New Testament scholar who taught my required introduction to the Bible course, I fell in love with that field.” So Tucker added a second major—biblical and theological studies.

“My college professors were the total package—good scholars, good teachers, and good mentors,” Tucker notes. “They inspired me to become that same kind of professor”—and toward that end, after college he pursued master’s and doctoral degrees focusing on the New Testament.

Tucker received his Ph.D. in 2016 from the University of Pittsburgh, but he’d started teaching at PTS several years earlier, while he was still a doctoral student. First, as an adjunct professor, he taught summer Greek. Then, since his research focuses on the life of Jesus, the Gospels, and the reception history of the New Testament, he began offering a variety of courses in those areas as well. Now, as the Seminary’s new visiting assistant professor of New Testament, he’s continuing to offer such courses and more.

“I love teaching biblical studies because I get to share my passion for these endlessly fascinating texts that are theologically formative as well as historically interesting,” says Tucker. His classes aim to expose students to the breadth and richness of New Testament scholarship, while also “preparing them for how they will encounter the Bible in their individual contexts.” In other words, he’s intent on finding ways to bridge the academic study of the Bible with everyday devotional and practical aspects of reading and teaching Scripture.

Tucker’s first book, which investigates how New Testament texts and later readers dealt with the rejection of Jesus, appeared in T&T Clark/Bloomsbury’s prestigious Library of New Testament Studies series in 2019. His next book projects include a historical and exegetical study of the Second Coming tradition—a topic he notes is largely ignored in the study of Christian origins—and another on portraits of discipleship in the four Gospels.

Dr. Tucker Ferda gives his readers and his students strategies both for thinking critically about the Bible and for implementing academic learning in the circumstances and situations encountered in daily life. In other words, he is today that true scholar-teacher-mentor his professors inspired him to become.

“The Ending of Mark and the Faithfulness of God: An Apocalyptic Resolution to Mark 16:8.” Journal of Theological Interpretation (forthcoming 2019).

“Matthew 21:1-11.” Between Text and Sermon. Interpretation: A Journal of Bible and Theology (forthcoming 2019).

“Reason to Weep: Isaiah 52 and the Subtext of Luke’s Triumphal Entry,” Journal of Theological Studies 66 (2015)

“Jeremiah 7 and Flavius Josephus on the First Jewish War,” Journal for the Study of Judaism 44 (2013)

“John the Baptist, Isaiah 40, and the Ingathering of the Exiles.” Journal for the Study of the Historical Jesus 10 (2012) 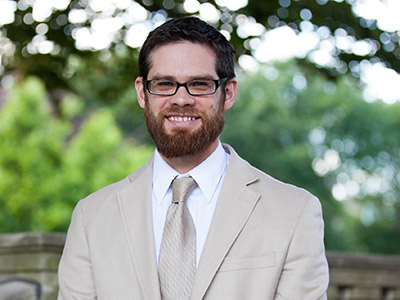