For more than 30 years, the Rev. Eleanor Williams ’07 served Pittsburgh Public School children as a special education teacher. But that succinct summary falls far short of telling the whole story of Eleanor’s service, not only to disabled and disadvantaged students at various schools in the public school system,  but also to the many others who have benefited from her ministry in the community and church. In fact, in recognition of her accomplished service in Pittsburgh she was named a 2012 recipient of the city’s 50 Women of Excellence award in the area of religion.

In addition to teaching learning- and emotional-support students, serving as an instructional support/response and literacy interventionist, and tutoring community children, Eleanor co-founded Parents Against Violence in 1993 in response to a rise in street violence. Licensed and ordained as a Baptist preacher by the New Zion Baptist Church in Manchester and an ordained elder of the African Methodist Episcopal Church, she served seven years as a pastor in the Mon Valley—at St. Paul AME, Quinn Chapel AME, and Wayman AME. She merged Quinn Chapel and Wayman AME, and they still function as one today.

Educationally, Eleanor prepared well for all these roles. After graduating from Oliver High School, she earned a B.S. in special education from Duquesne University, then two master’s degrees—one in educational leadership and administration from Carlow University, and an M.Div. with an Urban Ministry certificate from PTS.

But Eleanor didn’t stop there! She also serves on the board of directors for the Josh Gibson Foundation (and is, in fact, a niece of the Negro League legend himself!), continues to write and present her poetry (which has been published in several anthologies), and in 2008 spearheaded a “Back to School Bash, which works yearly “to give students the opportunity to be school ready.”  Then in 2012, she collaborated with several grassroots organizations and started the North Side Partnership Project. With the NSPP the “Back to School Bash” took on a new twist when Eleanor received a Sprout Fund grant to incorporate health screenings, inspirational music and speakers, and school supplies in the program to help alleviate the stress that accompanies going back to school. The event also provided families with the opportunity to voice their concerns, meet authority figures, get to know their neighbors, receive clothes and dental supplies, and enjoy food and games together.

In all her accomplishments Eleanor feels blessed to have taken mission trips to Vietnam with the Seminary’s World Mission Initiative and to Africa with Lemington Senior Daycare. A visionary, big-picture ministry—that’s what Eleanor’s been all about. And she still is! 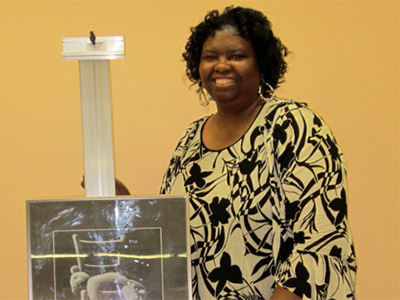