Trista (TJ) and Ryan Lucas have taken a page right out of the Lord’s playbook. Balancing their lives as pastors, parents, full-time seminary students, and community leaders requires the same carefully orchestrated planning that is at the heart of this promise from God in the book of Jeremiah. God’s life plans for TJ and Ryan, who are both pastors in the United Church of Christ (UCC), unfolded in remarkably similar ways:  they both grew up in tight-knit families in small towns in Pennsylvania, their households of origin were dominated by male children, their paths crossed at the same college in their first semester there, and, ironically, even though neither of them were raised in church, their early faith journeys were punctuated by transformative experiences that they each understood as God’s unmistakable invitations for them to serve God’s people.

Before God’s plans for ministry became clear to them, TJ, who was a speech-language pathology and audiology major, worked for two years at a non-profit organization, while Ryan, who was a small-business management and entrepreneurship major, spent four years in the financial services industry, and also worked for a non-profit company. While God’s plans for their ministry work were still taking shape, the couple married in May 2010, after Ryan graduated from college. Even though TJ considered pursuing an advanced degree in her field when she graduated the following December, God continued to order hers and Ryan’s steps towards ministry when they began serving together in youth ministry two years later at their home church. In her role as Christian education director there, TJ, who describes her upbringing as “unchurched,” delighted in learning Bible songs and stories for the first time as she taught them to her students.

God’s intentions for the Lucases’ lives in ministry became even clearer as they continued to serve together. Shortly after starting to work in youth ministry, Ryan enrolled in a lay ministry program through the UCC, and his exceptional promise for ministry resulted in an invitation to serve a small congregation as a stated pulpit supply pastor. After two years in pulpit supply, he accepted his current position of interim pastor at a small church in Chicora, Pa. About the same time that Ryan was completing his lay ministry program, TJ, who is a licensed minister, was assuming her new role as pastor of a small church with an aging congregation in Apollo, Pa., just five minutes from where she grew up.

In time Ryan decided to come to seminary in order “to be a better preacher, educator, and leader of a congregation.” The following year TJ, who had fallen in love with the seminary community through her experience as a spouse, acknowledged her call to ordained ministry and started seminary too.

Between the two of them TJ and Ryan, have served on mission trips to South East Asia, Brazil, Kenya, and The Netherlands  through the Seminary’s World Mission Initiative, which has been a particular blessing as a part of their seminary journey.

With the courage, determination, and intentionality of Esther, TJ’s favorite biblical character, the Lucases engage wholeheartedly in Sabbath-making and keeping. The joys of their lives are their two daughters, Ella and Willow. When TJ isn’t parenting, pastoring, studying, or engaged in work as the president of the Women’s Caucus student group, she enjoys reading, painting, composing blackout poetry, and reconnecting with friends over coffee.  Ryan’s Sabbath delights include cycling, hunting, and kayaking when he isn’t busy with work, home, school, or serving as a volunteer firefighter for his local community. 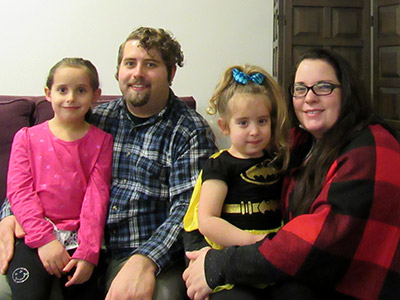