“Beloved community” is a beautiful metaphor for a redeemed world—but the work to make it a reality is always local. These unprecedented times provide us with an opportunity ask these questions again:

Hear from pastors, activists, and teachers whose remarkable work spans generations and contexts—from the civil rights movement to new worshiping communities. Learn practical strategies and hear inspiring stories from members of Black Mountain School of Theology that will reinvigorate what you are doing in both church and neighborhood! Gather with others who care about this work as much as you do.

Henderson Lecture on Church and Ministry

The 2022 Henderson Lecturers on Church and Ministry will be the Rev. Dr. Paul Smith, Presbyterian minister to multiracial congregations, mediator, and civil rights activist; and Andrew Young (joining from Atlanta), friend of Martin Luther King Jr. and student of Howard Thurman. Dr. Smith and Ambassador Young will speak on Monday evening, June 6, 2022, at 7:00 ET. The online lecture is free to the public and all are welcome via Zoom.

The Rev. Dr. Paul Smith, a Midwesterner by birth, attended Talladega College in the mid-1950s when central Alabama was a civil rights battleground. Since those days, Dr. Smith has continuously voiced his commitment to racial equality and justice as an activist and one of the few Black Presbyterian ministers. Dr. Smith graduated from Hartford Seminary and earned his Ph.D. at Eden Theological Seminary. Over more than 60 years of professional life, Dr. Smith has led politically active, multiracial, multicultural congregations in Buffalo, St. Louis, Atlanta, and New York. Now retired from a 20-year pastorate at a historic church in Brooklyn, Dr. Smith continues to preach, teach, and mediate. He lives in Maryland.

Ambassador Andrew Young is a minister and civil rights leader, a former confidant of Dr. Martin Luther King Jr., U.S. Ambassador to the United Nations, Mayor of Atlanta, and U.S. Congressman. Young is among the last surviving members of King’s inner circle. He served as executive director of the Southern Christian Leadership Conference, the civil rights group that King founded, and was with King when he was assassinated in 1968. Young went on to become the first Black person from Georgia sent to Congress since Reconstruction when he was elected to the U.S. House in 1972. President Jimmy Carter later appointed him ambassador to the United Nations, where he served until his resignation in 1979 amid public uproar over a clandestine meeting with members of the Palestine Liberation Organization. As mayor of Atlanta in the 1980s, Young is credited with boosting the city’s stature.

The Rev. Patrice Fowler-Searcy is a native of Indianapolis, Ind., and has resided in Pittsburgh since 1996. She currently serves as the Associate Pastor for Mission Ministries at East Liberty Presbyterian Church where she is a member of the Mission Board, three Mission Committees, and the Board of Deacons. She also serves the community as a member of the East Liberty Development, Inc., and on Pittsburgh Theological Seminary's Boards of Directors. Patrice holds a B.S. in Psychology from Purdue University and a M.Div. from Pittsburgh Theological Seminary (PTS). She was awarded The Michael Wilson Keith Memorial Prize in Homiletics, as the senior class member with the highest standing in the department of homiletics upon graduating from PTS. Patrice has two sons, Johannon and Ian; two “daughters-in-love,” Kori and Debbie; one phenomenal granddaughter, Kaylin; and is expecting another grandchild soon.

Tim Conder has worked for over three decades in ministry, community organizing, and academics. He has been a church-planter and was a co-founder of EmergentVillage. He is a theological ethnographer researching theo-political social movements, the identity development of publicly engaged pastoral leaders, and community organizing.

Dan Rhodes is associate professor of contextual education at Loyola University Chicago’s Institute of Pastoral Studies. He has developed innovative programs in theological education grounded in theological action research. Prior to Loyola, he served in ministry for nine years and has extensive experience as a leader in community organizing.

Imelda Salazar is an organizer with Chicago’s Southwest Organizing Project . Originally from Guatemala, she has a background in organizational management and expertise in leadership development. She is one of 14 recipients of the 2019 Leaders for a New Chicago Award given by The Field Foundation of Illinois and The John D. and Catherine T. MacArthur Foundation.

Dan Frayer-Griggs, serves as visiting assistant professor of Bible and writing specialist in the Center for Writing and Learning Support, PTS. The two parts of Dr. Frayer-Griggs’ role here reflect his two academic passions that have been intertwined since he was an undergraduate student: religion and English. Since obtaining his Ph.D. from Durham University in 2013, Dr. Frayer-Griggs has been on a whirlwind teaching tour in the Pittsburgh area. He has taught at Community College of Allegheny County, Carlow, University of Pittsburgh, and Duquesne University. His courses have covered a wide range of subjects—from English to the Bible to world religions. At the Seminary, his courses have focused on Greek and exegesis (i.e. critical interpretation of the biblical texts).

Tara Woodard-Lehman is a writer, salvage artist,and ordained PCUSA minister. For over 20 years she served in a variety of ministry settings as a Lilly Fellow, University Chaplain, Lecturer, and Parish Associate. Tara served on a crisis response team during her tenure as the Presbyterian Chaplain at Princeton University offering grief care, listening sessions, and lament workshops for students and staff. She spends her time restoring furniture, consulting, exploring nature, and tending to her high-energy beagle, Hook. As a member-at-large in the Pittsburgh Presbytery, Tara serves in a variety of local congregations as a pulpit supply preacher. She is married to Dr. Derek Woodard-Lehman, and together they are raising two boys, Josiah and Eli.

All sessions will be offered via Zoom Room. Times are Eastern.

Registration is closed for this event.

Continuing Education certificates will be available upon request to . 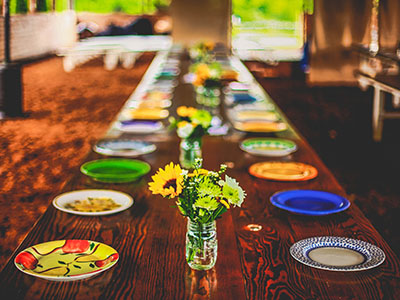