Second-year M.Div./MSW student Ben Little could hardly be busier! A full-time student, he also holds three part-time jobs and spends two days each week as full-time, stay-at-home dad for his one-year-old son and three-year-old daughter. Not only that—two of Ben’s jobs are in youth ministry, and his third is as a swim coach, all three of which roles require time outside a set schedule of hours. Study time? “Starting at nine o’clock, after the kids go to bed.” But do they sleep through the night . . . ?

Still, Ben seems to have endless energy, perhaps largely because he senses his call to ministry so strongly. “My call came when I was 23 and working in the kitchen at McGee Women’s Hospital,” Ben explains. “I’d done odd jobs here and there and had dropped in and out of college since finishing high school, but I didn’t have a clear sense of direction. I felt restless in my job at McGee,” he recalls. “Sitting in a field at Camp Crestfield in Slippery Rock [Pa.], I asked God where he wanted me, and for the first time in my life I heard very clearly, ‘No one is doing ministry to middle school kids in Elizabeth [Ben’s home town].’ And I knew that’s what I was being called to do.”

In fact, Ben’s youth pastor had been “grooming” him for youth ministry since Ben was in high school. “But I’d never heard such a call as I did that day in Slippery Rock,” he says. As it turns out, the session of Ben’s church had talked about opening up a position in youth ministry for middler schoolers just the previous week! Ben was hired and has been in that position for 10 years now.

So where does seminary come in? “Ultimately, my decision to go to Seminary came down to fact that I felt limited in what I was able to do because I needed to know more, go deeper, and be more serious about what I was doing so that I could expand my ministry,” Ben says. So he had discussions with his wife, Christina, other members of his family, and friends about how to make seminary happen. Between Christina, Ben’s parents and sister, and his best friend, they worked out child care so that Ben could enroll in PTS’s dual-degree master of divinity/master of social work program full time.

“The MSW is important for my work with youth because it will enable me to do counseling. My ministry hinges largely on building relationships of trust with youth so they feel comfortable talking with me, and the education and experience the MSW program offers will help me expand my ministry in a way that fills a growing need in my community for counseling youth,” Ben notes.

In addition to Ben’s job as a youth minister to middle schoolers, he also runs a program for high school students largely following the Young Life model. “In my home town, this area of ministry seemed to be slowly dying, so I wanted to develop something across denominational lines that multiple churches could support and participate in.” One of those churches has allowed Ben’s group of 15-20, mostly unchurched high schoolers to meet for “Club” in its manse—the top floor of which Ben’s older sister rents! After three years on its own, Club is thriving.

Ben says his education at PTS has put him in a better position to respond to young people’s curiosities about the Bible, Jesus, and the Christian faith. “I feel more confident about the answers I give them, even when my answer is to say, ‘I don’t know.’ I’m growing in my understanding of the larger picture. The knowledge I’ve gained on a deeper level has certainly been challenging, but for me seminary has also been a spiritually uplifting experience. For me it has been freeing and liberating to examine my faith in the intellectual realm. It’s feeding me in an area I haven’t felt fed in a long time.” 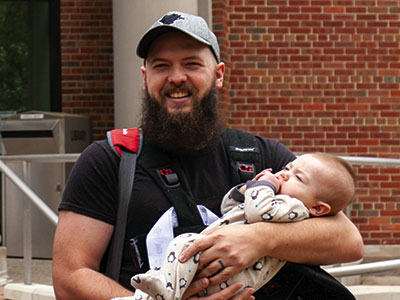