In 1620, Greyfriars Kirk was built in the Old Town of Edinburgh, Scotland. For centuries, the parish church would play an important role in developing liturgical practices for the national Church of Scotland. In 1857, for instance, minister Robert Lee penned an influential order of public worship for Greyfriars that was based entirely on the Psalms.

In 2018, graduating DMin student Lezley Stewart ’18 stepped into this long history of worship innovation when she presented Greyfriars Kirk with a new worship resource for a new age.

Stewart was serving at the kirk while pursuing her doctorate through a partnership between PTS and the University of Edinburgh. For her final DMin project, she followed in Robert Lee’s footsteps by imagining—reimagining—what the Psalms might mean for people worshiping at Greyfriars today.

“I wasn’t translating the language. I don’t even have Hebrew,” Lezley explains. “Instead, I tried to translate the feelings and questions in the Psalms.”

The final result—after receiving feedback from parishioners and building upon her initial DMin project—was Let Everyone Find Their Voice, a published book of worship resources for folks across the Church of Scotland (and beyond). It is a rich collection of new psalms, liturgies, and questions for personal reflection or group discussion. The book explores important themes of faith such as creation, refuge, and refreshment.

For Lezley, pursuing the Doctor of Ministry degree offered an opportunity to return to the academy and reflect on years of ministry. She had finished her schooling in 1998 and had been engaged in church ministry for almost two decades when she learned about the PTS partnership with Edinburgh. She was excited to join the Reformed Focus cohort that was a mixture of Scottish and American students and to gather together in both countries. When she graduated in 2018—almost 20 years to the day from her last graduation—she did so alongside new friends from her own country and from across the U.S. The cohort has stayed in touch and hopes to reunite in 2023.

Lezley is now serving the Church of Scotland in a new way. As she was finishing her DMin program, she was also transitioning from the Greyfriars Kirk team to the national church setting, where she now provides leadership for the recruitment and support of ministers.

But she’s still writing. Here’s a reflection that arose within the realities of the global pandemic:

There were other doors
once locked in fear
in a time of waiting and distress.

It was an uncertain,
questioning time -
longing for what had been known and treasured before.

Into that space came
these welcome words -
“Peace be with you.”

Peace be with you in every worry,
In every sleepless night,
In every loss experienced,
In every comfort now distant.

Peace be with you in every certainty,
In the shared burden of these days,
In the unexpected connections,
In the gift of another sunset and sunrise.

Christ is our peace
and is in our midst.
His words echo again -
“Peace be with you.” 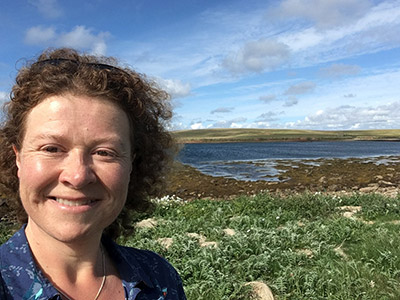